Westport and the Irish Volunteers 1916

By 1916 Westport was a well-established battalion in the Mayo Brigade of the Irish Volunteers. Westport was given Battalion status and the various outlying companies became attached to the battalion. Natural leaders were now coming to the fore and a true patriotic Irish-Ireland ethos was emerging. Names such as Ring, Derrig, Malone, Kitterick, Gibbons, Duffy and Hughes were soon to make their mark in the events of the Easter Rising and its aftermath. Training went ahead steadily and prominent members from G.H.Q. such as Mellows, The O’Rahilly, MacNeill, and MacDiarmada made inspection visits to the Westport Battalion. However, the Rising came as a complete surprise to the Westport Battalion, as it had been taken in by the confusion that was emanating from G.H.Q. and the MacNeill quarrel in Dublin.

The railway staff brought in news of the 1916 Insurrection to Westport. Newspapers were not printed for a few days and the townspeople were hungry for information. Eventually, papers started to arrive in the town, and the extent of the Insurrection was made known. Tommy Hevey relates how he saw Major John MacBride’s photograph on the front page of a newspaper, telling of his execution. Mrs Joyce, the newsagent, then dispatched him immediately to the MacBride home at Westport Quay with the bad news. Hevey said that “Mrs MacBride was deeply shocked and just bowed her head.”1 As in other locations nationwide, the Irish Volunteers leadership was in a state of shock and disbelief. They had missed out on the fight through the confusion that had been brought about by the interference of Eoin MacNeill. All Volunteers had now to obey the ceasefire orders issued by the Commander-in-Chief, Pádraic Pearse.

Joe Ring, of Drummindoo, was the O/C of the Westport Irish Volunteer Company at this time. He realised that the organisation would crumble if remedial action was not taken immediately to boost the morale of the men. With his staff Ring organised a route march to Farnaught Hill, one and a half miles south of the town. Here, Joe Ring and his officers addressed the men and urged them to remain alert, loyal and steadfast.  The RIC had accompanied the march to Farnaught, at a distance, and had taken notes of what had been said at the gathering. The authorities struck after this, and thirty-three men from the Westport district were taken from their homes and places of employment and placed under arrest at the RIC barracks at Shop Street (Where the Allied Irish Bank is now located).

The town was in a state of high excitement as friends and relations gathered on Shop Street, endeavouring to make contact with the prisoners. All roads into the town had been sealed off by a contingent of 120 British soldiers from the Cavalry Barracks in Castlebar, and it was obvious that the men were going to be moved out to prison elsewhere. On the evening of 9th May 1916, the men were marched to the rail station and put on board the Dublin train. However, they were taken off again at Castlebar and lodged in the Military barracks there for the night.2 Next morning, the prisoners were put on to the Dublin train again, and they were brought to the Broadstone Station in Dublin City. They were now marched through the streets, and they could see the full extent of the damage caused by the events of the Insurrection. Eventually, the prisoners were placed in the quadrangle of Trinity College. Again they were moved out, this time to the main holding centre at the barracks at Inchicore.3 On the 11th they were moved again to the North Wall docks and put aboard a cattle ship for England.4 They were now broken into smaller groups and sent to various prisons throughout Great Britain. Twenty-two of the men would end up in the main internment camp in Wales, ‘Frongoch University’.

All internees were now appearing before a prison committee that had the power to order the release or further detention of individuals. The first Westport men to be released were Martin Geraghty, Thomas O’Brien, Patrick Kenny, John Logan, John Berry, Hubert Heraty and Pat Hughes. Some of these men were sick and and others had been interned without any reason whatever. Next to be released were Thomas Ralph and John Gavin. On 29th July, Thady Walsh, Michael Reilly, Bart Cryan, John McDonagh, Edward Gannon, Charles Gavan, Edward Sammon and Charles Hickey arrived home at Westport. On 5 August, Edward Haran, Tom Derrig, Michael Derrig, Michael Duffy, Joe Ruddy and James Malone were released. The remaining prisoners were all released in time to be home for Christmas. These included Charles and Owen Hughes, Pat Tunney, Manus Keane, Joe Ring, Joe Gill, Joe MacBride, Darrell Figgis and P.J. Doris.5

During the period that the men had been interned, great interest was shown at home to their predicament. Across the country, branches of the Irish National Aid Association (the INAA) were set up. This organisation gave financial assistance and moral support to the families of the internees, and prepared for the eventual release of the men. Lists of subscribers to the INAA were reported in the local papers, and it was surprising to see who was now helping out financially.

Top contributors included priests, doctors, solicitors, etc. These professional classes had been solidly Redmondite up to this, and these defections were significant in that it indicated the fundamental change that was taking place in the hearts and minds of the nationally-minded people.1

The secretaries of the Westport Branch of the INAA were J.J. O’Malley (engineer) and E.J. Gallagher, The Mall. Not all of the leading Volunteer members in Westport had been picked up in May 1916, and it fell to them to keep the organisation active and prepared. Edward (Ned) Moane of Carrabawn, and the Malone brothers of High Street, Seán and Willie, were very prominent and hard working during these months. These men were also involved in setting up branches of Conradh na Gaeilge (the Gaelic League) in the town, Aughagower and Cushlough. As well as promoting the language, it gave ideal cover for reorganising the Volunteers. Concerts had become very popular and there was a great interest shown in singing about the events of Easter Week, 1916. The RIC now deemed it seditious if they found people singing these songs. This law was very difficult to implement but the RIC persisted, and they started to attend all concerts that were organised by Sinn Féin and Conradh na Gaeilge.

Vincent Keane is a regular contributor to Cathair na Mart. He is joint editor of The Men Will Talk to Me: Mayo Interviews by Ernie O’Malley (Mercier Press). 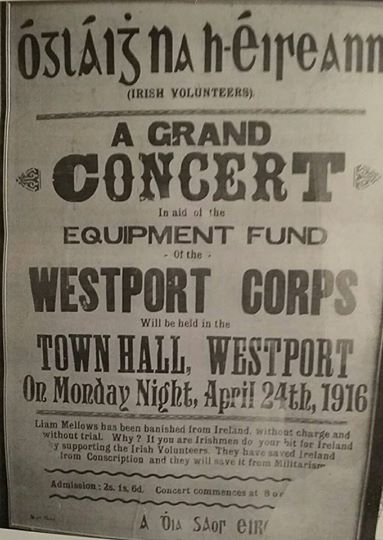