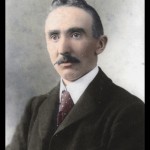 Major John MacBride (7 May 1868– 5 May 1916) was an Irish republican executed by the British for his participation in the 1916 Easter Rising.

John MacBride was born at The Quay, Westport, County Mayo, Ireland, to Patrick MacBride, a shopkeeper and trader, and the former Honoria Gill, who survived her son. A plaque marks the building on the Westport Quays where he was born (now the Helm Bar and Restaurant). He was educated at the Christian Brothers’ School, Westport, and at St. Malachy’s College, Belfast. He worked for a period in a drapery shop in Castlerea, County Roscommon. He had studied medicine, but gave it up and began working with a chemist’s firm in Dublin.

He joined the Irish Republican Brotherhood and was associated with Michael Cusack in the early days of the Gaelic Athletic Association. He also joined the Celtic Literary Society through which he came to know Arthur Griffith who was to remain a friend and influence throughout his life. Beginning in 1893, MacBride was termed a “dangerous nationalist” by the British government. In 1896 he went to the United States on behalf of the IRB. On his return he emigrated to South Africa.

Participation in the Second Anglo-Boer War 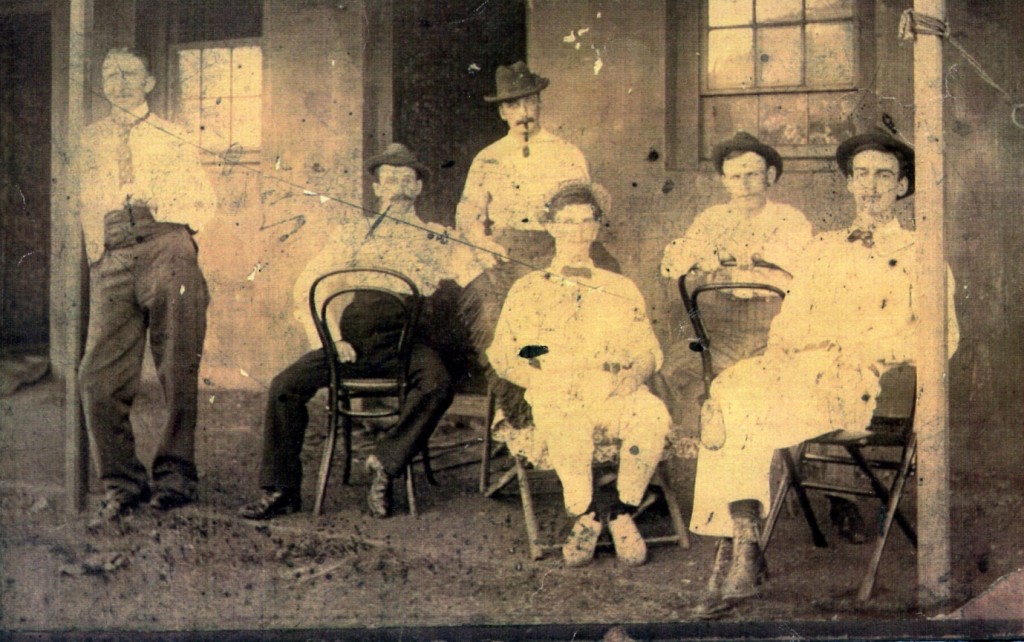 South Africa 1898. John MacBride standing on left. Arthur Griffith is seated at the back with the pipe.

He took part in the Second Boer War, where he raised the Irish Transvaal Brigade. What became known as MacBride’s Brigade was first commanded by an Irish American, Colonel John Blake, an ex-US Cavalry Officer. MacBride recommended Blake as Commander since MacBride himself had no military experience. The Brigade was given official recognition by the Boer Government with the commissions of the Brigade’s officers signed by State Secretary F.W. Reitz. MacBride was commissioned with the rank of Major in the Boer army and given Boer citizenship.

The 500 Irish and Irish-Americans fought the British. Often these Irish commandos were fighting opposite such Irish regiments as the Royal Dublin Fusiliers and the Royal Inniskilling Fusiliers. From the hills around the besieged town of Ladysmith to the plains of the Orange Free State, MacBride’s Brigade first looked after the Boers’ great Long Tom gun, then fought in the Battle of Colenso and later held the rearguard, harassing Lord Roberts’ cavalry as the Boer army retreated. However, a larger number of Irish (whose sympathies led to them being labelled West British) fought for the British against the Boers.

A Second Irish Brigade was organised by Arthur Lynch. The arrival in the Irish camp of an Irish-American Ambulance Corps bolstered MacBride’s Brigade. Michael Davitt who had resigned as an M.P, visited MacBride’s Brigade. When Col. Blake was injured at Ladysmith MacBride had to take sole command of the Brigade. Though Blake later returned for a short period he later left the Brigade to join another commando. In Ireland, pro-Boer feeling, informed by Arthur Griffith and Maud Gonne formed the most popular and most fervent of the European pro-Boer movements.

When MacBride became a citizen of the Transvaal, the British considered that, as an Irishman and citizen of the United Kingdom of Great Britain and Ireland, he had given aid to the enemy. After the war he travelled to Paris where Maud Gonne lived. In 1903, he married her to the disapproval of W. B. Yeats, who considered her his muse and had previously proposed to her. The following year their son Sean MacBride was born.

The marriage had already failed but the couple could not agree on custody of Sean. Maud instituted divorce proceedings in Paris. No divorce was given but in a separation agreement Maud won custody to the baby until age 12. The father got visiting rights and one month each summer. MacBride returned to Dublin and never saw his son again. Anthony J. Jordan argues that MacBride was a much maligned man in the divorce proceedings. He posits that on the merit of WB Yeats believing Maud Gonne’s accusations against her husband, successive biographers of Yeats have treated them as factual, ignoring the verdict of the Parisian Divorce Court. Dr. Caoimhe Nic Dhaibhid endorses Jordan’s position. 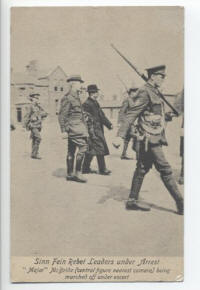 The arrest of John McBride 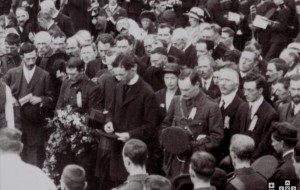 Pictured standing behind Pearse at the O’Donovan Rossa funeral

After returning permanently from Paris to Dublin in 1905 MacBride joined other Irish nationalists in preparing for an Insurrection. Because he was so well known to the British, the leaders thought it wise to keep him outside their secret military group planning a Rising. As a result he happened to find himself in the midst of the Rising without notice. He was in Dublin early on Easter Monday morning to meet his brother Dr. Anthony MacBride, who was arriving from Westport to be married on the Wednesday. The Major walked up Grafton St and saw Thomas MacDonagh in uniform and leading his troops. He offered his services and was appointed second-in-command at the Jacob’s factory.

After the Rising, MacBride, after a court martial under the Defence of the Realm Act, was shot by British troops in Kilmainham Gaol, Dublin.

He was executed on 5 May 1916, two days before his forty-eighth birthday. Facing the British firing squad, he said he did not wish to be blindfolded, saying “I have looked down the muzzles of too many guns in the South African war to fear death and now please carry out your sentence.” He is buried in the cemetery at Arbour Hill Prison in Dublin.

The poet Yeats, gave him the following ambivalent eulogy in his poem “Easter, 1916”:

“This other man I had dreamed
A drunken, vain-glorious lout.
He had done most bitter wrong
To some who are near my heart,
Yet I number him in the song;
He, too, has resigned his part
In the casual comedy;
He, too, has been changed in his turn,
Transformed utterly:
A terrible beauty is born.”

Maud Gonne wrote to Yeats “No I don’t like your poem, it isn’t worthy of you & above all it isn’t worthy of its subject… As for my husband he has entered eternity by the great door of sacrifice… so that praying for him I can also ask for his prayers”.

(This extract is a summary from: https://en.wikipedia.org/wiki/John_MacBride)