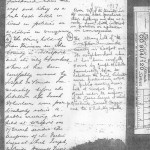 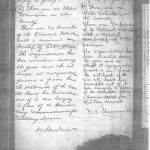 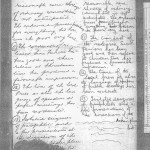 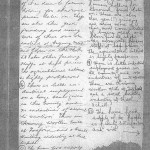 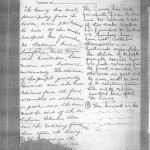 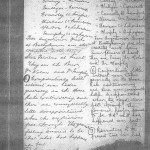 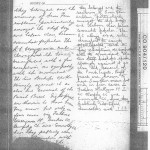 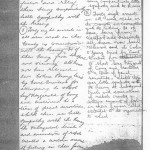 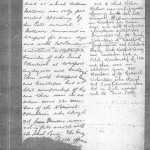 (4) Over 70% of the tenants in this county have purchased their holdings and they as a rule have little interest in politics or agitation in consequence.

The strong hold of Sinn Feiners in this county is (in) Westport and its neighbourhood where it has been carefully nursed by Joseph McBride. Immediately before the Rebellion the Irish Volunteers were frantically active. A public meeting was held at Westport on 17th of March under the auspices of its Gaelic League at which Joesph McBride, Darrell Faggis and the O’Rahilly spoke, and at which William Mellows was only prevented appearing by his late arrival. Mellows remained in Westport for some days and with McBrides assistance established branches of the Irish Volunteers at Westport, Aughagower and Cushlough. These with Westport Quay and Castlebar had a total membership of 164 and there was in addition some 330 members of the national Volunteers who though not Sinn Feiners were not in full accord with the Irish Party. (Text not available).

Was hailed generally with a feeling of 376 and relief there being comparatively little sympathy with the Rising.

(5) Forty eight arrests in all were made in the county in connection with the Rising. 31 of these being from Westport and (the) vicinity. All have now been released and Colum O’Geary tried by Court Martial for attempting to shoot Sergeant Fitzgerald of Cong and sentenced to a term of penal servitude. Whilst there was little sympathy with the Rising, the subsequent trials and executions of rebels created a certain amount of feeling in their favour which extended to the organisation to which they belonged and the securing of Sinn Fein emblems, particularly amongst the shop boy(s) and labour clan, became somewhat popular. The RC clergy as a rule throughout the county manifested, with a few exceptions, no sympathy with the movement. The two Bishops spoke strongly against it as also did several of the Parish Priests. Eight Priests are known to have Sinn Fein views but only in four cases Reverent Fathers Mulligan PP, Meehan CC, Murphy CC and Connolly CC, have they publicly identified themselves with (Text not available).

Two Augustinian Friars at Ballyhaunis are also credited with being Sinn Feiners at heart. They are the Friars, Fr. Nolan and Fr. Murphy.

(6) Comparatively little interest was taken generally in the Home Rule controversy and there was consequently little disappointment when the negotiations fell through. (7) The general feeling seemed to be that what had happened was best. Recruiting at the present time is bad. The county has sent, principally from the towns, some 921 recruits to date. Of this number Westport has furnished 30, Ballina and Swinford have done well, Castlebar, Claremorris and Ballinrobe moderately. The attitude of the people generally towards men, who have returned from the front, wounded or otherwise is good and the same must be said of the relations between them and the military quartered here after the Rising.

(8) The harvest on the (Text not available 379). Shortage has been greatly exaggerated and much of this is due to farmers holding for abnormal prices later on. These are also this year grinding and using more of their own corn instead of buying meal and flour in the shops. As also other feeding stuffs at high prices. The agricultural interest is highly prosperous.

(9) There is little industrial employment on a large scale given in the county and no industries of reward to mention. There are thriving Woollen Mills at Foxford and a small knitting industry at Keel Achill.

(10) The home food supply of the people is fairly satisfactory and with reasonable care shortage of ordinary commodities is not anticipated. The enhanced prices prevailing for everything, hit however, the poor very hard.

(11) The conduct of released Sinn Feiners has been good and their release at Christmas time has produced a favourable impression.

(12) The tone of the local press as also like language of speakers at public meetings has been moderate.

(13) Isolated seizures of pamphlets and a few prosecutions at the directions of the (Text not available 381).

Special mention here, please see however my reply to query 5.

(14) There are no Ulster Volunteers in the county. There are 54 branches of the National Volunteers with a nominal membership of 4350 persons.

The organisation has been inactive during the year and the attempt at reorganisation proved a fiasco. Since the outbreak of the War all heart has dwindled out of it due largely to fear of the members being commandeered for Military Service.