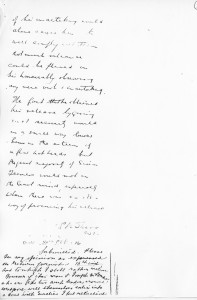 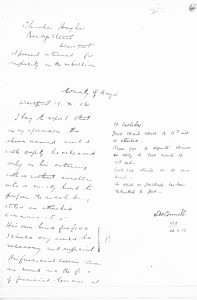 At present informed for complicity in the rebellion.

I beg to report that in my opinion the above named could with safety be released only on his entering with or without sureties into a surety bond to perform the undertaking stated on attached communication. His own bond for £100 I should say would be necessary and sufficient. His financial circumstances are sound and the first of financial loss cannot of his undertaking would alone cause him to well comply with them. Not much reliance could be placed on him honorably observing anymore undertaking. The fact that he obtained his release by signing his surety would in a small way lower him in the esteem of a few hot heads but the great majority of Sinn Feiners would not in the least mind enforcing when there was no other way of procuring his release.

Submitted. Please in my opinion as expressed on earlier furnished 16th inst. and to which I still rather incline. However if this man and Joseph McBride who are like two arch leaders around Westport will themselves enter into a bond with sureties I feel reluctant (Text not available).

Your special report on 15th inst. is attached.

Please give a definite opinion on reply to govt minute of 17th inst.

Each case stands on its own merits.

The report on J McBride has been submitted to govt.