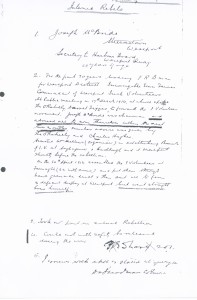 I beg to report that if Joseph McBride would keep the undertaking as stated in attached communication. I believe he could safely be released. I believe however, that he would not and could not benefit. He is such an irreconcilable hater of England and the English government that he could not restrain himself from taking part secretly in any movement which would be calculated to be injurious to England the Court Inspector.

I could not place any reliance on his own undertaking. To secure his good behavior, I believe that a surety bond should be entered into by the prisoner and two approved sureties in substantial sums say at least £50 each, making themselves jointly and severely liable for his good behavior.

The influence of his sureties, (who most likely would be his own relatives) would likely (have) some effect in making him keep his undertaking. There is not much danger of him (uphearly) breaking the law. The principle danger to be feared is from his secret advice and encouragement to others to seditious and other illegal acts.

Joseph McBride and Charles Hughes are the head leaders around Westport and if these two men are released it would look inconsistent to retain the other interned prisoners from here. The release of Joseph McBride under guarantee would not have much affect locally. It would be realised that the government was determined not to release him without a proper guarantee, and under the circumstances he would not be expected by the local Sinn Feiners to take any active part in their illegal schemes and thus place his sureties in danger of a monetary loss.

He would not be likely to stick to his guarantee and honourably observe it if the guarantee was only his own undertaking, but if sureties were required then out of consideration for them he would likely give no chances of harm.

The reassurance (Text not available).

I do not believe however that he would under any circumstances loyally observe his undertaking.

I believe that if a surety bond with two solvent sureties in substantial amounts be entered into he could safely be released. No doubt when it became known that such a guarantee for his future good behavior was given, he would be lowered in the esteem of the more advanced Sinn Feiners but the great majority would be enhanced to say that he was right, as he is now a long time in prison and there seemed no other way of getting out. 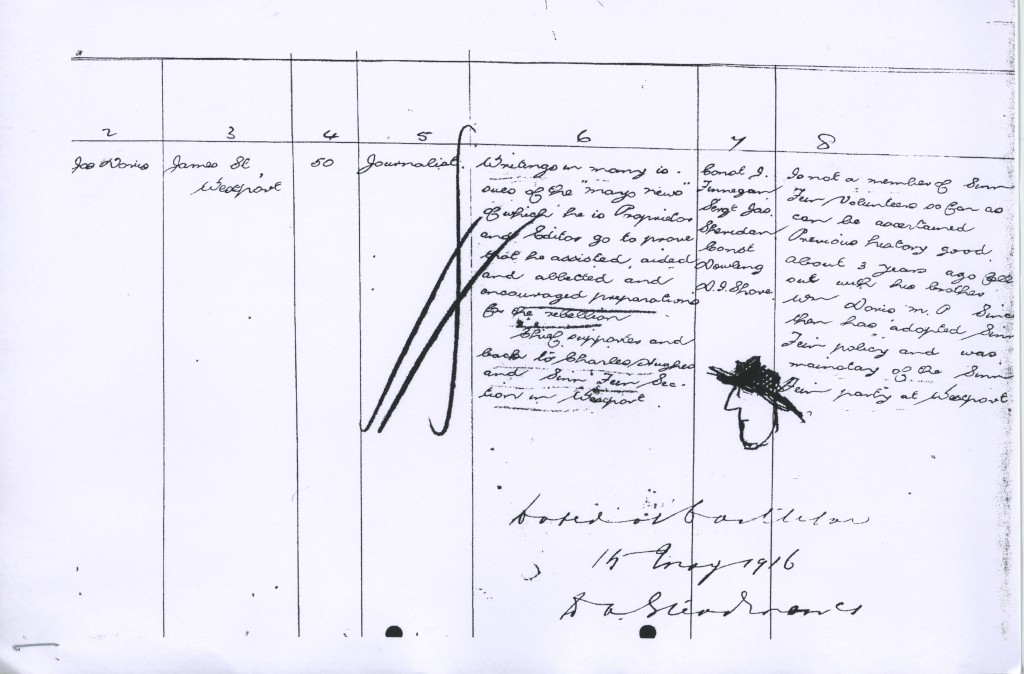 The Memories of the Struggle for Freedom by Patrick Tunney as published in the Western People
RIC report of Charles Hughes 22.X.16